The question I posed in my article How To Be Happy With Everything was: In one word, what do you long for?  I listed what I believe to be eight universal desires.  Universal desire number 1 was Happy and I wrote about that already.  Number 2 was Money.  To have enough money and not have to worry about it you first have to be debt-free.  The best way to get out of debt is to create a good relationship with money.

I want this post to be useful and beneficial to you and me.  That said, I have added affiliate links to this article and would love it if you decide to use them.  😘

Debt Weighs You Down

Having debt weighs you down, physically and mentally.  You are unable to do the things you want to do and create new experiences because you have no money after paying your bills and debts.  This takes its toll and you begin to suffer from stress and anxiety.  No matter what you do, the debt lingers in the back of your mind and you can never forget about it.  It robs you of enjoying life now.

The debt has to go but before that you have to  understand how you got there in the first place.

It took me years to get my head around the idea that I had a relationship with money that was either benefitting me or not.  Like a lot of people, I grew up in a household that had money, just not a lot of it.  My family had just enough so that I had a roof over my head and meals to eat every day.

Growing-up I picked-up various statements and phrases about money:

“No you can’t have that, money doesn’t grow on trees.”

“The rich get richer and the poor get poorer.”

“It’s easier to spend money than save money.”

“Money only comes from hard work.”

“You’ve got to have money to make money.”

And the all time classic “Money is the root of all evil.”

My “favorite” phrase was “What am I going to buy it with, BUTTONS?”

I know that I was influenced by much more than the above statements.  I heard conversations, discussions, and arguments from family, friends, work colleagues, and acquaintances about money, usually negative stuff.  I watched TV shows, movies and listened to the news.  My subconscious absorbed it all.

For a long time I had no idea that these negative money beliefs were effecting my financial situation.

By the time I was twenty I had two credit cards that were completely spent and I was still living at home!  I eventually got myself out of that pickle but a few years later it happened again.

I bought a house when I was twenty-five on my own.  I worked for an insurance company at the time that offered 100% mortgages.  Meaning, I didn’t have to put down a large sum initially. It suited me because I didn’t have any savings or any surplus wages hanging around.

Long story short and two years later, I had another couple of credit cards that I had used up plus a loan.  So, I got a bigger loan and paid off everything so that I just had one payout each month. I don’t recommend that but for me, it did simplify things and from that moment on I got wiser. I didn’t get into a lot of debt again but at the same time, I never seemed to have much money.

What I didn’t realize is that I had a lot of negative beliefs about money.  Those beliefs seeped into my life and limited me.  They limited:

My relationship with money sucked!

Understand Your Relationship With Money

I get it now, but only because I realize that ANY negative belief still running in my subconscious mind from years ago will effect what I do now.  That is until I remove it.

Like old, forgotten programs on a computer that slow it down and cause it to stop working – your negative money beliefs are slowing you down and stopping you from not having the money you want. You may have the best intentions, as I did but you will continue to self-sabotage until you remove those old programs and replace them with beneficial ones.

By doing this, your relationship with money will become amazing.

Money is the root of all evil – Money is good.

You’ve got to have money to make money – I can make money when I start off with little money.

I do not deserve success – I am successful in everything I put my hand to.

*Note that I obviously haven’t seen money grow on trees.  However, the expression needs to be squashed as it comes from a place of scarcity.  If you believe that money doesn’t grow on trees, then money will be difficult for you to come by, it’s as simple as that.

Once you’ve done some deep thinking about the negative money beliefs you hold and have worked out what you will replace them with – it is time to enter into your subconscious mind and program it with your new beneficial beliefs.

It is here that you can influence your subconscious as you start to listen to your new beliefs.

You can either do this by yourself or use tools and technology to help you.

Some Ideas On What To Do Next

Keep listening every day and until things start to change.  The subconscious learns through repetition, for more information on the subconscious mind and how it works read this.

It can be challenging to do this by yourself, so if you prefer to listen to pre-made audios and use technology tools to get you super relaxed, consider the following:

Get 30% off any Real Subliminal program

TECHNOLOGY TO HELP YOU RELAX:

MindPlace have Light and Sound Mind Meditation technology that will get you into deep states of relaxation.  They have a range of products and each one has a range of fifty or more pre-programmed sessions each for a different purposes. 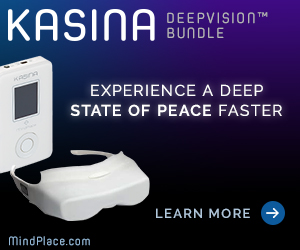 Get Out of Debt Forever

Once you improve your relationship with money you will get out of debt forever  Plus, because you have dealt with the root issue surrounding the money issues you will begin to see money flow to you.

Not only will you get out of debt but you will begin to live in abundance. Happy days!

The name of The Game is Experience so let us experience Connecting and Sharing.

Comment below – Got any tips on how to stay debt free and attract money?

Save THIS PIN below to your Self-Care or Change Your Life Board to check later and have the information easily at your finger tips.

Hi – I’m Louise, glad you popped by my blog today! I created it to live my best life yet and show you how you can too.

11shares
We use cookies to ensure that we give you the best experience on our website. If you continue to use this site we will assume that you are happy with it.OkPrivacy policy